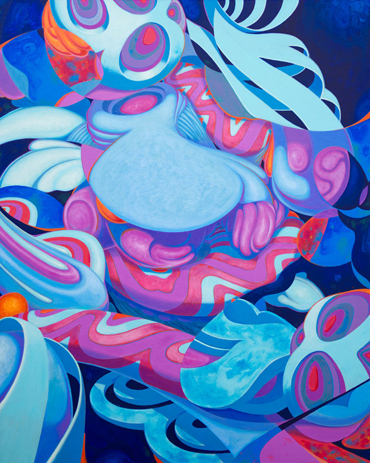 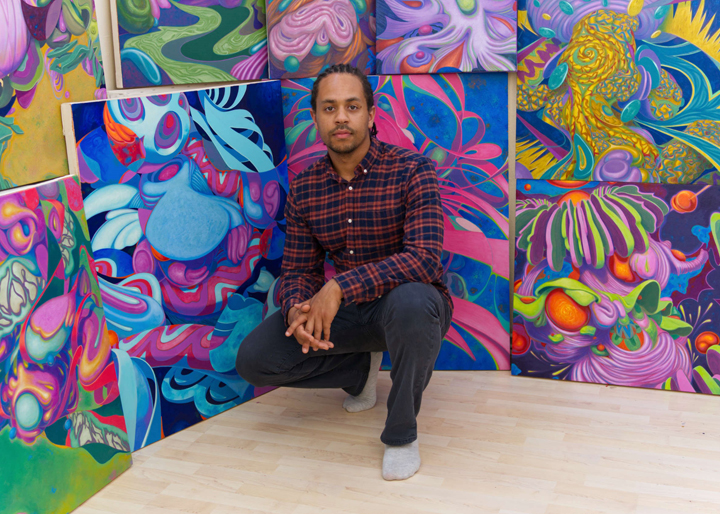 Jarvis Brookfield’s first solo show is an exhibition composed of multiple imaginal, psychedelic and vibrantly colourful paintings drawn from his experiences with altered states of consciousness. What is the stuff of altered states of consciousness? Why is it possible to experience different states of mind other than the baseline one of day to day life or sleep? And what can they tell us about what it means to be human? Are all questions that bubble unanswered beneath the surface of Brookfield’s practice.

Engaging with the imagination through drawing and exercising his intuition and memory, Brookfield has combined traditional and expressive painting techniques to articulate four elements that he found to be intensely present in his own experiences. He defines them as energy, vitality, luminosity, and dimensionality. As a result of exploring these elements the paintings are colourful, whimsical and non-representational, yet recognisable, worldly, and alien forms slip in and out of focus creating the sensation of a hallucination.

Jarvis Brookfield works with acrylic paint and drawing to explore his experiences of altered states of consciousness and the internal world of what it means to be human. He was born in Croydon, England in 1992, grew up in Derby and studied Fine art in Leicester, where he attended De Montfort University. His work has been featured on Creativeboom and the cover of Artit magazine and he is currently pursuing a life of artmaking in Leicester.