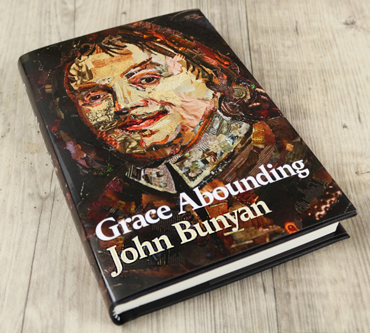 The publishers 'Banner of Truth' approached me to create a portrait of John Bunyan for the cover of the re-release of this very old autobiographical book," says Danielle Vaughan. "The publishers now have the original large portrait I created hanging in their offices in Edinburgh"

John Bunyan wrote Pilgrim's Progress which is regarded as one of the most significant works of religious English literature,; it has been translated into more than 200 languages, and has never been out of print. It has also been cited as the first novel written in English.[7]

'Grace Abounding to the Chief of Sinners', or the alternative title 'The Brief Relation of the Exceeding Mercy of God in Christ to his Poor Servant John Bunyan' is a Puritan spiritual autobiography. It was composed while Bunyan was serving a twelve-year prison sentence in Bedford gaol for preaching without a license and was first published in 1666.

"Grey House in Edinburgh, where the publisher is located is also a bit of a tourist spot for 'pilgrims' who like to visit the building," says Danielle, So my portrait is getting its own little audience."