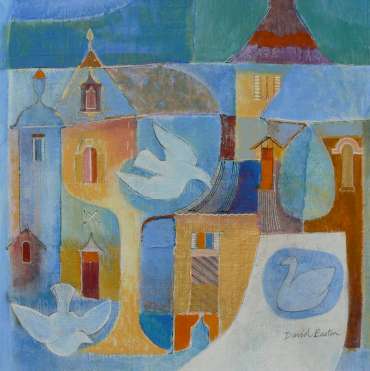 David Easton was Secretary of Leicester Society of Artists from 1998 to 2005. 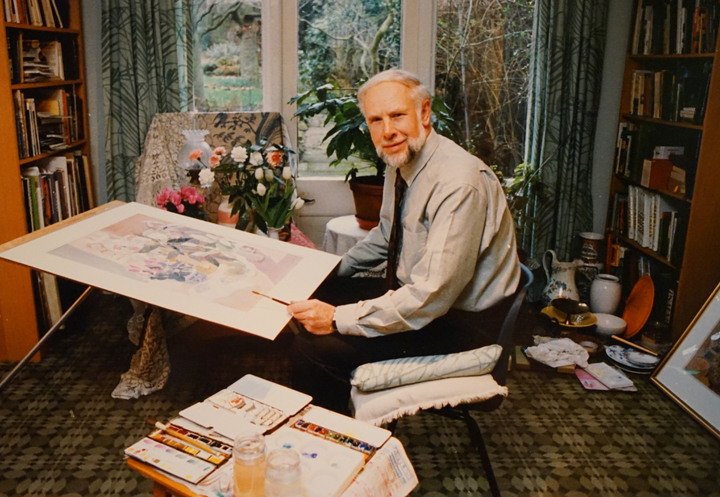 David William Easton qualified in Commercial Design in 1956 at Leicester College of Art and after national service in Malaya his first job was at Gayton's Studios as a Graphic Designer. He married the artist Shirley Easton in 1959, also a Member of LSA. He became a member of the Leicester Sketch Club in 1954 and was the 3rd longest serving member, only pipped to the post by Shirley, the 2nd longest!

With a growing interest in painting, David was elected to membership of Leicester Society of Artists in 1962. In the 1970’s he decided to go into art education and having obtained a B.Ed. in 1976, David Easton taught in schools and colleges, including 26 years at the Adult Education Centre. He became a self-employed professional artist in 1982.

In 1985 David was elected a Member of the Royal Institute of Painters in Watercolours (RI) and he took part in many group shows by the RI around the UK. In 1987 he was awarded the Winsor & Newton Prize, awarded for the most outstanding group of works in the RI Annual Exhibition. His work was included in the RA Summer Exhibition in 1986.

1986 also marked the beginning of a 10 year stint for David and Shirley of taking students abroad to various parts of France, including Paris to paint. Later, in the 2000’s, followed a decade of organising and leading groups to draw and paint in the French Alps, staying in a friend’s Chalet; then Portugal was also added to the list of venues, the last one being in 2009.

When David was invited to Art Societies to give appraisals of students’ work, he had in mind, not just the technique of paint application or the fine detail, but the composition of the piece, how it worked together as a whole within the frame and how the colours worked in harmony. "He strived for this in his own work and encouraged it in others," says LSA Member Margaret Chapman, "And, as I experienced myself, his approach was to emphasise the good points, draw attention to the weaknesses but all in a positive way."

As a self employed professional artist and educator, David Easton wrote two books for Batsford, Watercolours Flowers and Watercolour Inspirations in the 1990’s and he also wrote articles for national Art magazines. David and Shirley also devoted Saturdays to running painting courses in their home and garden, setting up still lives for 8 students at a time. David Easton regularly exhibited at the Bircham Gallery in Holt, Norfolk. David and Shirley held joint exhibitions of their work in their home starting in 1990, and the last exhibition was in 2017.

We remember David affectionately as Secretary of Leicester Society of Artists from 1998 to 2005. As well as running council business and meticulously scribing the Minutes in beautiful handwriting, he organised two LSA exhibitions each year and the LSA Annual Lecture at New Walk Museum & Art Gallery.