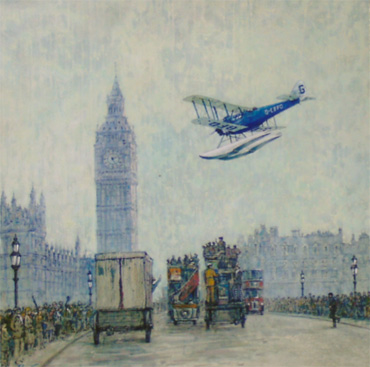 Peter Sumpter was born in 1933.  He completed his National Service at RAF Wyton and became a technical illustrator. Peter taught art in adult education classes at Charles Keene College and Crown Hills Community College, and was a member of Leicester Sketch Club where he also gave talks about drawing. He held 13 solo exhibitions of his work in the UK.

A keen aviator, he was an active member of the Guild of Aviation Artists, which he joined in 1992, regularly taking part in the GAvA annual exhibitions in Pall Mall, London, and often winning prizes for his paintings of aircraft.  His works are held in collections by the Royal Air Force Museum, Leicestershire County Council Museums Service and Leicestershire County Cricket Club.  He was in awe of the courage and determination of the lifeboat crew, which he often captured on canvas and was commissioned to design the "Man the Lifeboat" board game, which was sold in the late 1980's in the RNLI shops.