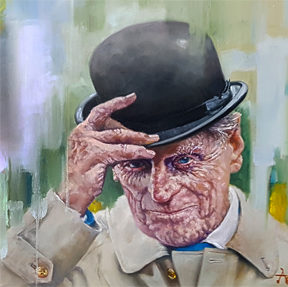 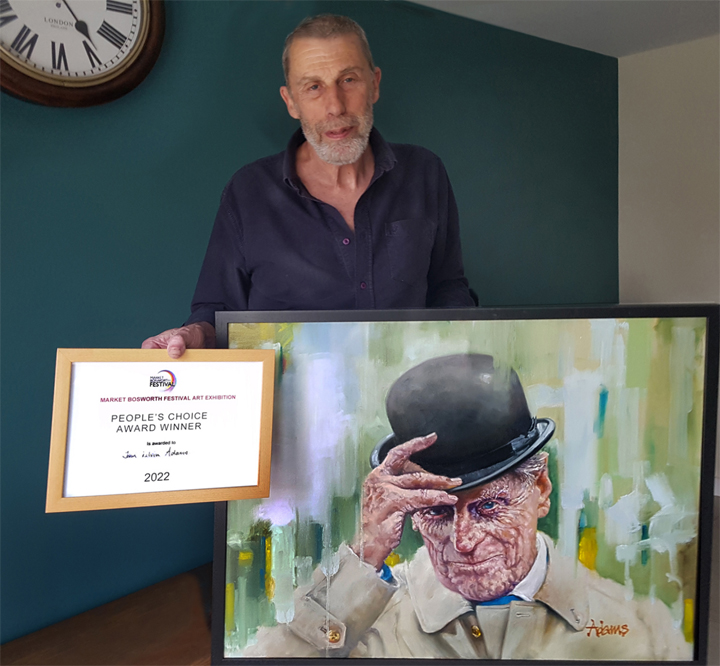 "I produced this painting over maybe a four week period, half an hour here, perhaps an hour the next day and so on, really whenever the mood took," says Kelvin Adams. "Whilst I'm not a 'royalist' I had always appreciated what Prince Philip had contributed to the country and to the Royal family. I liked his face because it looked lived in, weathered and had lots of nooks and crannies, just the thing I like in a portrait.

I started by producing a pencil drawing, which I transferred to the canvas. I don't really have a method of applying paint, simply taking off not knowing what colours to use or where the whole thing is taking me, just amending what doesn't look right and changing this and that until it does look right - to me at least.

My first boss at the Leicester Mercury in 1961, an ex-British army war time Captain, advised me when I was struggling with a design for a Morgan Squires advertisement, "If it looks right, it blinkin' well is right". I think this uncomplicated approach to life, much like that of the Prince's, has influenced the way I go about painting.

An organiser of the Market Bosworth Arts Festival invited me to supply a painting into the art gallery exhibition and this painting, having become topical, was my entry. She later asked if I would paint something live over the two days of the exhibition. The prospect of exposing my inadequacies to the world terrified me, but I agreed. I turned up with my easel and other paraphernalia and was located at the end of the gallery, right next to a grand piano where I set up and made a start. This positioning proved delightfully rewarding when a Venezuelan concert pianist turned up and began a wonderful recital containing works by Chopin and the like. In conversation during a break she offered interesting thoughts on how certain combinations of musical notes create pleasing results, just like particular neighbouring colours will liven up a painting... a wholly enjoyable two days followed."