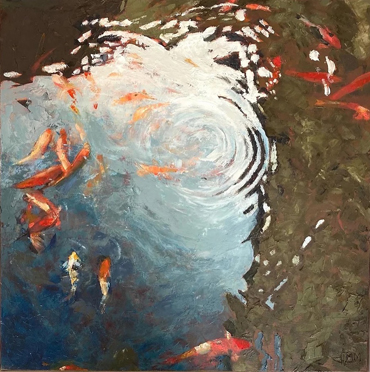 Lisa Timmerman is a Leicestershire based artist who trained at Loughborough and Bristol's West of England Art College. After a career in Fashion and Textiles which took her all over the world, she sought to retain as an oil painter.

In 2011, under the supervision of Paul Wright (the other Leicestershire based painter in show) her painting career began with a solo exhibition awarded at Northampton Open Studios by '78 Derngate', Northampton. A consistent flow of awards, group and solo exhibitions have followed since then. Last year Lisa's two koi paintings sold at the ‘Royal Society of British Artists’ exhibition at The Mall Galleries, London and this year her koi paintings have been preselected for the ‘Society of Women Artists’ exhibition in London.

In Lisa's most recent series of paintings - studies of koi fish in their sunlit pool - the subject is carefully observed. The energy and motion of the koi through the water is represented by fast brushstrokes and daubs of bright colour, while the surface of the water is shown broken by the fish and their movement. Other areas of cool deep water give calm and rest within the paintings.

Paul Wright is a Leicestershire based artist who began his studies at Falmouth School of Art. He has spent the last twenty years developing a painterly language through which he seeks to capture a vitality beyond the establishment of a mere ‘likeness’ to the subject. Whilst Paul appreciates the importance of the subject being recognisable, they are glimpsed at rather than exposed; their inner selves hinted at but ultimately inscrutable. Although Paul often works on a large, potentially imposing scale, the work remains immediate through fluency of brush marks and a rich palette. The spaces the subjects inhabit are often indeterminate, providing an atmosphere that allows for ambiguity of psychological state. Integrity remains yet a sense of intimacy is evoked.

Starting at the 'Portrait Award Exhibition', National Portrait Gallery, London in 2006, Paul has exhibited at numerous reputable galleries including those across the pond in the United States of America and Canada.