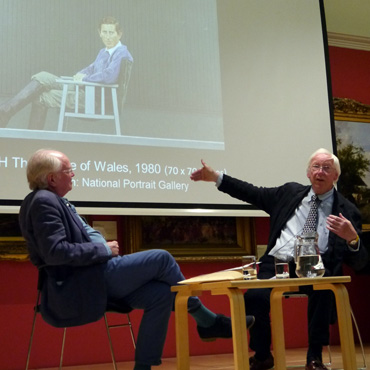 On a warm May 4th evening I made my way through the doors of Leicester’s temporarily dubbed ‘Blue’ Walk Museum, to join a packed out audience of 170 plus for the hottest ticket in town. There was a buzz about the beautiful New Walk 19th century classical building, not least and understandably because the eminent portrait artist Bryan Organ was soon to be in conversation with Michael Attenborough, former Executive Director of the Almeida Theatre and son to one of Organ’s most nationally loved and frequently painted sitters, Richard Attenborough; both men, sons of Leicester and just two more examples of the city’s success.

Sitting two rows back from the raised stage of the museums main gallery, I watched as an overhead screen played just a selection of Organ’s vast back catalogue, a who’s who of British and world public life, from celebrity royalty,  like Mary Quant, Elton John and Martin Johnson to political royalty, several British Prime Ministers and everyone from Lord Jenkins to President Mitterrand - to actual royalty, including the late Princesses Margaret and Diana, Prince Philip and the Prince of Wales. 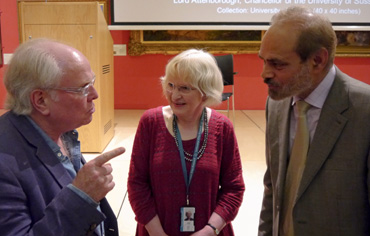 A hush fell over the crowd and then spontaneous applause as Organ and Attenborough walked from the back of the gallery to take their seats on stage. Opening with a nod to Leicester City Football Club’s recent Premiership win, Attenborough, a Chelsea supporter, unfurled his home club’s scarf in humorous tribute, then turning to Organ began by asking him how he had first been drawn to portraiture.

Bryan Organ was born in Leicestershire in 1935 and now lives between London and Leicestershire. He attended Wyggeston Grammar School for Boys and from 1952-59, studied at Loughborough College of Art and then the Royal Academy Schools. He was a Lecturer in Drawing and Painting at Loughborough College of Art from 1959-65. Today, his works are in public and private collections across the world; The National Portrait Gallery (UK) houses 16 of his paintings. He has had one-man shows in Leicester (in the very space we were seated in, the only person in the history of New Walk Museum & Art Gallery ever to have done so), London, New York, Italy and Germany and has been represented by the Redfern Gallery since 1967.

Organ described life as a student in the fifties, remembering a country that was grey and very different to now. In 1949 he saw Graham Sutherland’s portrait of Somerset Maugham, the date and environment were important; given these, Sutherland’s piece represented a ‘staggering innovation’  which ‘ broke almost every rule’. Around the same time he became interested in Giacometti ‘haunted by figures set in isolated, lonely space’. The ability of both artists to capture the essence of a sitter in an experimental way was later to become integral to his work.

The mid 60’s saw the advent of colour television and further inspiration for Organ. He recounted seeing a series of interviews with raconteur of the day, Malcolm Muggeridge and being fascinated by his complex series of mannerisms and expressions. At the time portraiture was experiencing a dormant phase so that engaging with it was, as Organ put it ‘tantamount to suicide’. Nonetheless, he was inspired ‘to tell a story’ about Muggeridge, capturing his movements in an almost abstract form that would still be recognisable - one that was more visceral and incisive than any straight depiction could ever be. The painting of Muggeridge is now in the Museum of Modern Art, Brazil. 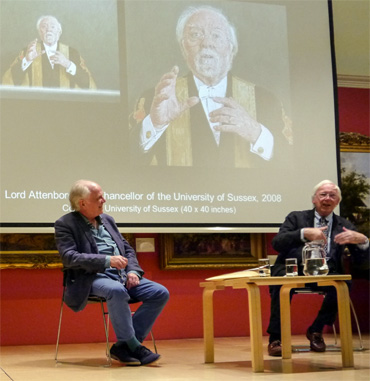 Throughout the evening, they discussed a sequence of the artist’s works, at one point Attenborough reflecting that in Organ’s portraits of his father he could almost smell him and hear his voice, and it was to these and not photographs he returned in order to reconnect. The paintings, he observed, took a variety of approaches but always, through marks, tone, brushstrokes, colour and space, captured the essence of the sitter.

Organ reflected on his process of getting to know and exploring his subject through a series of sittings and social meetings, creating a relationship in a natural, incremental way.

"The best way to paint a person is to know them, and the better you know a person and the more acquainted you are with their mannerisms and character, the better you would be able to capture them." 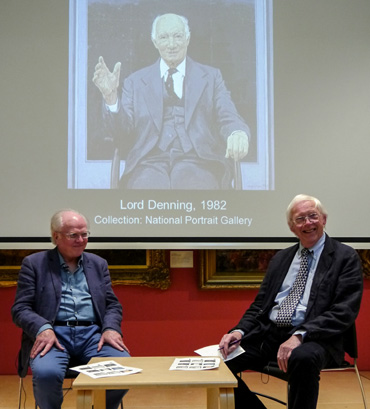 ‘It is about acute observations, looking intently at every movement and little mannerism - the more you understand the subject, the better chance you have.’

It is arguable that the layering possible with a relationship and a painted portrait of it will always be superior to the single frozen moment in time that is possible with photography. This was something addressed by Organ toward the end of the evening, when questioned by an audience member on the issue of using photos as opposed to working from life. Photographs, he said, were a useful aid, but could obstruct by leading to paintings being immediately recognisable as digital in origin.

‘...the use of photographs – it’s a dangerous game – the part of the problem is that the photograph dictates to you and you can end up copying the photos or a part of it.’ 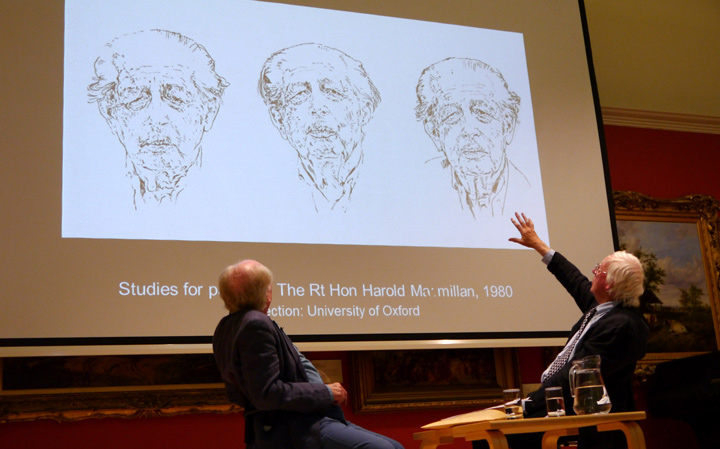 In a wide ranging interview that covered everything from the formal considerations of painting and historical context of Organ’s formative years, to intense encounters with figures like Sutherland (who was to become his friend), the Rt Hon Harold Macmillan and various members of the monarchy, one abiding reflection of Organ’s particularly resounds: ‘Remember why you are there, what you doing and why.’

Organ was one of the leaders in a new post war generation into the neglected field of British portraiture. ­However intimidating or larger than life the sitter, he never lost sight of his purpose ­and was always intimately aware of the need to look and record properly, as opposed to only using sight in a utilitarian way. His role was to combine the public and the private so that the viewer was both at a distance and drawn in; to do so, it was necessary to see through the detail and be selective.

‘At no second must you forget why you are there because you need to see every nuance which starts to give you a feel…the least movement of a mouth or an eye and it’s a completely different image.’

This skill of selection and summarising was something Attenborough was keen to admire, comparing Organ’s ability to do so with, specifically enough, Match of Day. Like the highlights of a match, Organ is adept at picking only the parts that are most crucial and necessary to tell the whole story. As with Leicester City Football Club, his is another story that the people of Leicester have every right to be proud of.

The event, concluded with an announcement by Chairman of the City of Leicester Museums Trust, Jim Roberts, that the Trust was to commission Bryan Organ to paint a portrait of David Attenborough, coinciding with his 90th birthday on May 8th. The new portrait, which is expected to be completed by the end of the summer, will hang with Lord Attenborough’s portrait in the New Walk Museum and Gallery.