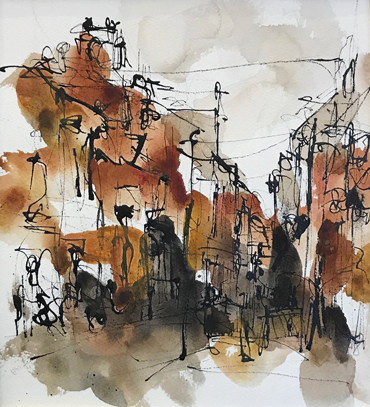 Within the Lines -  from the Urban Sketchers Netherlands blog

"I am delighted to have been included in an edition of 'That’s Another Way of Doing It' blog published on the Urban Sketchers Netherlands website", says Emma Fitzpatrick. "It is called 'Within the Lines' written by Anne Rose Oosterbaan and looks at different colouring approaches to painting streetscapes focussing on those that work outside and around line"

WITHIN THE LINES - Blog by Anne Rose Oosterbaan
Many urban sketchers start their sketch with a line drawing and then add in color afterwards, usually with watercolor. Would you add it there, on the spot, or rather later at home? Do you mix that exact brick color and then fill the shape of the building with it? In this edition you will see drawings by urban sketchers who take quite a bit of liberty in this regard: they do not color within the lines and they definitely do not take it too seriously when it comes to their color choices.A few don’t seem to look at the line drawing at all. Almost all of the sketchers say that they would rather try to capture the energy of the scene, than to accurately depict reality. In this edition of That’s Another Way of Doing It you will meet ten sketchers who do not bother to color inside of the lines.

Emma Fitzpatrick is a visual artist and designer, born in Dublin (Ireland) and based in Leicester (England). She is a founding member of the Urban Sketchers Leicester and of the Virtual Sketch Leicester group. If there is one thing that Emma tries to capture in her work, it is the interaction between people and their environment, whether a quiet neighbourhood or a busy city. The influence that humans have on their environment is what draws her. She uses a variety of materials, in this case she used a pen or stick, ink and watercolor. You can see her process on the YouTube video mentioned below.She jots down the landscape with lines, darting over the paper with her pen. Her paint application is done completely by intuition, and sometimes seems to hardly relate to the ink drawing. And once it is done, you see a powerful drawing, made in a uniquely willful hand. On the left Alexandra House Facade, on the right Millstone Lane, both in Leicester. 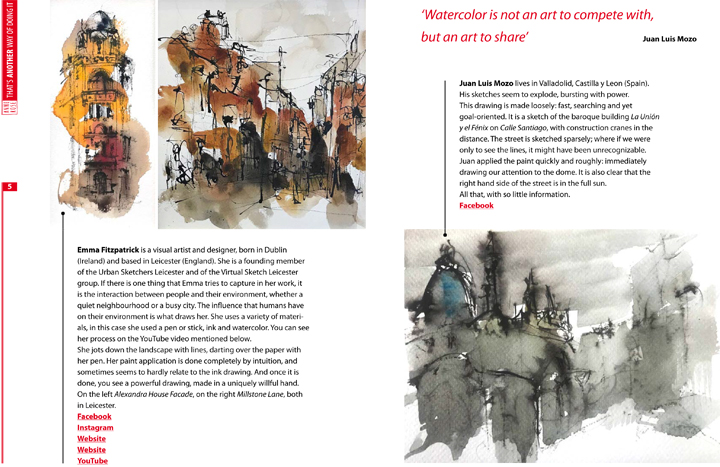